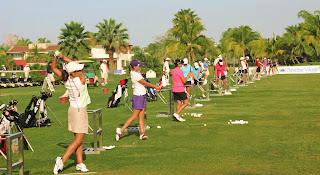 Sofie Andersson and Esther Choe share the lead after 18 holes of play at the Riviera Nayarit Classic. The duo sit atop the leaderboard at 6-under-par (par 73) both carded six birdies to shoot 6-under-par 67 (par 73) Friday at El Tigre Golf & Country Club in Nuevo Vallarta, Nayarit. Andersson started the day on the 10th hole and carded four birdies on the back nine while Choe matched her effort and had herself a strong start, carding four birdies on the front nine.
Symetra Tour rookie Calle Nielson sits two strokes behind the leaders and shot a 4-under-par 69. A group of four players, including T4 in the Volvik Race for the Card, Sara Maude Juneau, sit three shots off the lead at 3-under.
Both first-round leaders at the 2012 Riviera Nayarit Classic know how to get down to business when their tee times come at a tournament destination many would associate with vacationing and fun in the sun. But both Sofie Andersson and Esther Choe are playing at El Tigre Golf & Country Club in Nayarit, Mexico for their third-consecutive year and turned the switch on prior to their opening rounds on Friday.
“I’m pretty good at knowing when it’s time to work,” said Choe. “I knew it was business coming this week.”
Andersson agreed and admitted to not having an issue with beach or vacation distractions.
“Lucky for me, I’m not a beach person,” said Andersson. “I did pick up a towel yesterday because I swam a few laps in the lap pool but have not been on the beach; I have not touched the sand yet.”
The Sweden native attributed her light complexion, not well suited for the Mexican sun, for keeping her off the beach.
“It’s not a problem for me,” she added. “I’m very fair skinned.”
But both leaders were quick to point out the exceptional accommodations that come with their stay at nearby Paradise Village and the host club.
“It’s really fun,” said Andersson. “It’s great. And obviously if you play great, it’s even better. It feels good.
“It’s one of those tournaments, you don’t usually have a car or drive everywhere, or a host family or anything that could get between you and golf in some way,” Andersson added. “While we’re here, everything is taken care of, including the food. We show up for the shuttle, go warm-up and go play. So it’s easier to just do your job.”
A Bit Similar
The first-round leaders also have some striking similarities in their career rap sheets. Both Andersson and Choe turned professional five years ago in 2007 and looking for their second-career Symetra Tour victory this week in Mexico. This is the third-consecutive year the Tour veterans have played at El Tigre Golf and Country Club and both finished T35 in 2011.
https://www.rivieranayarit.com/wp-content/uploads/2019/07/logox300.jpg 0 0 1stonthelist https://www.rivieranayarit.com/wp-content/uploads/2019/07/logox300.jpg 1stonthelist2012-04-28 07:18:002012-04-28 07:18:00Andersson, Choe Share First-Round Lead at Riviera Nayarit Classic