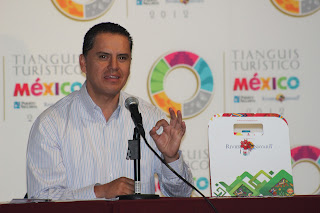 RIVIERA NAYARIT, March 27 – During Tianguis Turístico México 2012, the State of Nayarit´s Governor Roberto Sandoval Castañeda announced a new way to promote Nayarit by launching new theme attractions within the Riviera Nayarit region.
The announcement was made to celebrate the 5th anniversary of the creation of the Riviera Nayarit brand, whose rapid positioning, recognition and success – since its  launch at the Tianguis Turístico México 2007 – has allowed it to attain Mexico’s highest room occupancy levels, to lead the country in terms of clean-beach certifications, and to attract and become a leader in private investments for the tourism industry in beach destinations in Mexico.
The Governor stated that with this new strategy, his government intends to bring the benefits of economic development derived from tourism to the entire state, as these new brands encompass some of the most beautiful attractions that can be found throughout the state of Nayarit.
LAGUNAS ENCANTADAS (ENCHANTED LAGOONS) will help promote three beautiful lagoons: Santa María del Oro, situated in the crater of a volcano; San Pedro Lagunillas, with an enviable climate; and Tepetiltic, with its enormous oak trees.
SIERRA DEL NAYAR (THE MOUNTAINS OF NAYARIT) is the route that will convey the region where the largest ethnic groups in Nayarit coexist: Coras, Huicholes, Tepehuanos, and Mexicaneros. This vibrant mosaic of traditions is intertwined in our region; through their timeless celebrations and colorful art they share their magical view of the world.
NAYARIT COLONIAL highlights the tourism attractions that history has left in this state: monuments, architecture, landscapes, archeology and the most traditional Mexican flavors in places like Tepic, Jala, Compostela, Ixtlán del Río, and Ahuacatlán.
The Convention and Visitors Bureau of Riviera Nayarit celebrates the creation of these new theme attractions and reiterates its commitment and dedication to attracting tourism to the entire coast of Nayarit, from its southern border with Jalisco to its northern end in the border with Sinaloa, as well as to bring tourism to these new destinations in Nayarit.
https://www.rivieranayarit.com/wp-content/uploads/2019/07/logox300.jpg 0 0 1stonthelist https://www.rivieranayarit.com/wp-content/uploads/2019/07/logox300.jpg 1stonthelist2012-03-27 15:18:002012-03-27 15:18:00Riviera Nayarit’s success boosts the creation of new theme attractions in the region to promote tourism