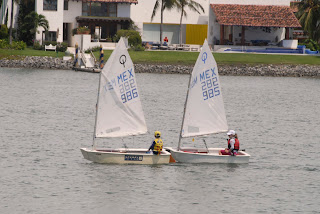 The Optimist class is one of the most popular to teach sailing to children and to the young ones. On March 16th  to 18th, during the Nautical Extravaganza at Riviera Nayarit, the youngest competitors will be able to test their skills at the Regatta Copa México Olympic Edition.
The Optimist is an international class of sailing boats designed in 1947 for children aged six to fourteen. It quickly became the preferred boat to teach sailing, as it’s a simple, stable, and competitive boat. The number of existing units around the world exceeds 250,000 and more than 100 countries are represented at the International Optimist Dinghy Association.
Clark Mills designed the Optimist in 1947, and the original design had its origins in a popular boat whose shape resembled a soap box used by many children in Clearwater, Florida.
Each year, the Vallarta Yacht Club in Nuevo Vallarta, Riviera Nayarit is home to the Regatta Wesmex, which brings together the best competitors in this category throughout the Americas. Just like in 2010, the competition is being offering in addition to the Mexico Cup.
RECOMMENDATIONS TO THE PUBLIC
Because the races take place in open water, these are the suggested times for the public to come and enjoy the experience from the public jetty at the entrance to Nuevo Vallarta Beach South:
11:00 am – 12:00 pm Sailboat departures
4:00 pm – 6:00 pm Sailboat arrivals
https://www.rivieranayarit.com/wp-content/uploads/2019/07/logox300.jpg 0 0 1stonthelist https://www.rivieranayarit.com/wp-content/uploads/2019/07/logox300.jpg 1stonthelist2012-02-28 11:18:002012-02-28 11:18:00Riviera Nayarit welcomes new generations of sailors