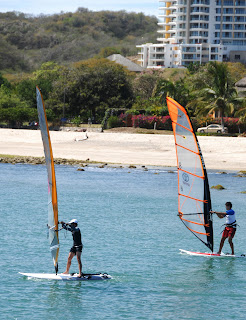 In Riviera Nayaritluxury means adrenaline, and this excitement will reach its climax during the Windsurf competitions that will take place in our destination as part of the Regata Copa México Edición Olímpica on March 7 – 10.

Windsurfing, a classic among water sports, will join the excitement that the Regata Copa México Edición Olimpica will bring to spectators, who will enjoy watching the greatest exponents of this discipline off the beaches in front of Flamingos Bucerias.
Windsurfing combines the best of two passions: sailing, and the thrill of riding over the waves on a board. Its history goes back to the early 30’s, when the great pioneer of surfing, Tom Blake, got tired of paddling with his arms in search of good waves and thought it would be a good idea to be propelled by the wind. After experimenting a bit, he inserted a very basic rig to his table and named his creation sailing surfboard.
There will be four categories for the windsurfing competitions, which will join the Nautical Extravaganza in Riviera Nayarit: Junior Olympic, RSX Olympic, Formula Experience and Open. To determine the top three places in each category, there will be ten races with two elimination matches (one for every five races).
The marketing efforts made by the Conventions and Visitors Bureau (CVB) of Riviera Nayarit include supporting activities like the Nautical Extravaganza and Regata Copa México Edicion Olimpica, as they guarantee to attract not only competitors but also an important media exposure by the news media that covers these events.
RECOMMENDATION TO THE PUBLIC
Because the races take place in open waters, the action will be viewable from the coastline around Marina Riviera Nayarit, during all competition days.
For more information, visit the Windsurf page:
Start here
https://www.rivieranayarit.com/wp-content/uploads/2019/07/logox300.jpg 0 0 1stonthelist https://www.rivieranayarit.com/wp-content/uploads/2019/07/logox300.jpg 1stonthelist2012-01-25 10:06:002012-01-25 10:06:00Riviera Nayarit will experience the combination of two passions

Brazil’s R7 Broadcasts The Riviera Nayarit In A Big Way

Riviera Nayarit Steps Up Promotion in Canada with Sunwing Airlines