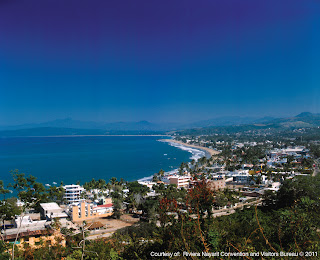 The Convention and Visitors Bureau (CVB) of Riviera Nayarit has attained important achievements according to the objectives defined for this 2011. This year, we decided to prioritize our online efforts through the use of social networks in order to affect one of the most influential media in the decision-making process of travelers.  Additionally, we’ve made constant efforts to diversify our markets, allowing for a better response to the adverse situations that are currently taking place in the natural markets of our destination.
“Riviera Nayarit’s presence on the Internet is now more user friendly. We’re now reaching a larger user base and we’ve established communication strategies in the social networks that will allow us to generate a modest but constant growth, which we didn’t have before”, said the President of the CVB of Riviera Nayarit, Fernando González Ortega.
In order to reach the defined objectives, Riviera Nayarit launched a new image for its English and Spanish websites, which now features more detailed information and an improved navigation. Additionally, we’ve optimized our resources to achieve a better positioning for key niche markets in search engines. These combined efforts have generated 265,000 unique visitors and 4,500,000 page views.
The initiatives to improve and manage media in social networks has allowed us to create two blogs – one in English and a second one in Spanish – and more focused efforts on Facebook and Twitter, which have generated a total of 7,250,000 impacts so far.
“The strategy to enhance our visibility on the Internet is a response to the statistical data compiled by the CVB, which shows that this media has an increasing influence in the purchase decisions of international travelers, which constitute the largest growing factor for hotel reservations”, stated González Ortega.
The most recent studies made by the CVB show that 41% of its visitors make their reservations online. Additionally, 9% make their travel decisions based on the information available online, while only 2% read brochures and 1% checks magazines.
NEW MARKETS
“Another objective defined this year was to diversify markets with the belief that by having an open range of possibilities, we can cope more easily with the situations generated by a slow economy in our natural markets. We know that this is a short-term effort, but we believe that this is the right time to begin attaining such a presence in those markets, due to the global interest that there is to learn more about Riviera Nayarit”, said the President of the CVB.
This year we managed to establish two new flights, one that connects us with the Netherlands and the second one with San Francisco. Together with Puerto Vallarta, we estimate that we’ll attract over 77,000 visitors per year, generating an economic downpour in excess of 106 million dollars.
“We’ve also sparked an interest in markets like Brazil, which chose Riviera Nayarit to host their largest business organization event in 2012, the LIDE summit. This event is similar to its Colombian version; after their travel agents visited us, they invited us to participate in their touristic fair through Travel Depot, the largest travel wholesaler in the country. We’ve also attracted the attention of the media in Chile, Peru, Brazil, Colombia and the United Kingdom, among other countries”, concluded Fernando González.
https://www.rivieranayarit.com/wp-content/uploads/2019/07/logox300.jpg 0 0 1stonthelist https://www.rivieranayarit.com/wp-content/uploads/2019/07/logox300.jpg 1stonthelist2011-12-15 10:24:002011-12-15 10:24:00The CVB of Riviera Nayarit is reaching its goals