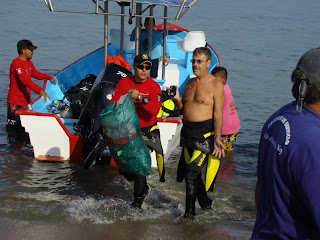 In Riviera Nayarit, luxury is our second nature. The participation of the society and NGOs has been fundamental to preserve the privileged environment throughout the 180 miles of coastline available in our destination. On December 3 and 4, a team of 45 professional volunteering divers accomplished a cleanup of the ocean floor, while the community made a cleanup of the beaches of this popular destination.
Approximately three tons of debris were removed from the area, getting Rincon de Guayabitos ready for the upcoming winter season, and guaranteeing the safety of the families that will experience an unforgettable vacation in our destination.
Riviera Nayarit is the leading destination in Mexico in terms of certified beaches, both because of their cleanliness but also because of the safety they provide for recreational activities. Three public access beaches in Nuevo Vallarta, one in Bucerias, one in Los Muertos in Sayulita and the Chacala Bay in Compostela are part of the certified beaches in Mexico’s Pacific Treasure.
The Convention and Visitors Bureau (CVB) of Riviera Nayarit, a private non-profit association dedicated exclusively to the touristic promotion of this destination celebrates the initiatives made by Arturo Gómez Ortiz, a diver who’s in love with Bahia de Jaltemba. Arturo had the support of the Municipal Government and the Association of Hotels and Motels of Compostela, lead by Rossana Araujo, as well as the participation of locals and expat communities in the region, and assembled a team of 20 divers and over 300 people to help make the cleanup.
Within the three tons of debris that were removed from the ocean in boats offered free of charge by service providers, the volunteers found tires, refrigerators, metal, bottles, paper and plastic.
“Efforts like these contribute to improve the touristic product in Riviera Nayarit, and this becomes evident through an enhanced travel experience for tourists, and in a marketing effort that is being done for our destination”, concluded Fernando González Ortega, president of the CVB of Riviera Nayarit.
A CANADIAN MAGAZINE IS FEATURING GUAYABITOS 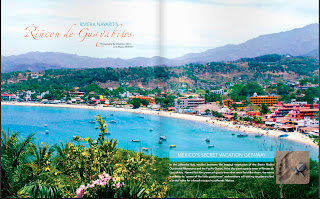 The Canadian magazine Mexi Go dedicated an article in its most recent issue to Rincon de Guayabitos, in Riviera Nayarit, featuring it as one of the secret escapes for Canadians in Mexican beaches. “You need to experience Bahia de Jaltemba before the whole world does”, stated the publication.
https://www.rivieranayarit.com/wp-content/uploads/2019/07/logox300.jpg 0 0 1stonthelist https://www.rivieranayarit.com/wp-content/uploads/2019/07/logox300.jpg 1stonthelist2011-12-12 10:03:002011-12-12 10:03:00Riviera Nayarit, a pristine destination

Playa el Naranjo, a slice of heaven in Riviera Nayarit