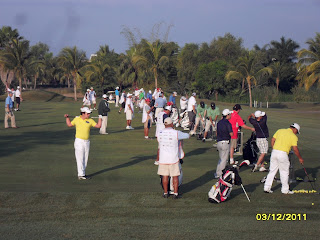 In Riviera Nayaritluxury is our second nature – the same nature that’s the backdrop of amazing golf courses that attract the most competitive players. The grand final of the Imagen Vector Golf Tour 2011 took place at El Tigre Golf & Country Club last December 3, and Reginaldo Javier Cepeda and José Carlos Cardoso were the winners.
The Convention and Visitors Bureau (CVB) of Riviera Nayarit congratulates Grupo Paradise Village and its director Graziano Sovernigo, as well as the director of El Tigre, Jesús Carmona, for their continuous efforts to promote the destination known as Mexico’s Pacific Treasure through actions like this tournament, which was widely promoted by the Grupo Imagen network throughout Mexico.
The strong impulse that our destination is receiving through events like the grand final of the Imagen Vector Golf Tour 2011 guarantee not only to attract competitors as part of the sports tourism in the region, but also offer the possibility to enjoy an important media exposure by the networks that cover such events.
Grupo Imagen is one of the largest media networks in Mexico. The group includes the cable channel Cadena 3, Excelsior newspaper, and the radio stations RMX, Reporte, La Kaliente, and Imagen, with an audience of thousands of households in Mexico and the United States.
FACTS
El Tigre Golf & Country Club in Riviera Nayarit was recently recognized as one of the best 15 golf courses in Mexico, according to Golf & SPA, after making over 2,800 surveys, including 30 specialists. However, this is not the first award received by El Tigre this year, as Rolex had previously ranked it as one of the best 1,000 golf courses in the world.
EL TIGRE ALSO HOSTED BADMINTON TOURNAMENT