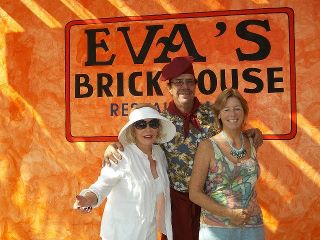 Last December 29th popular TV Host Joan Rivers was ‘boosted’ by the Fashion Police wearing a white hat and big sunglasses in a restaurant at La Cruz de Huanacaxtle, Riviera Nayarit, where she is spending a family vacation.
Rivers had enjoyed a magic sunset by this restaurant located right in front of Marina Riviera Nayarit, one of the most modern in Latin America, where sher had shrimp and white wine.
“She was very nice to everybody, answered all kind of questions and even took pictures with whomever asked her for. We did gave her space to enjoy though”, said to a local publication Eva Terry, owner of the restaurant where she has been more than once.
A few minutes earlier Joan Rivers had posted some pics on her Twitter account. The first of them displaying an astonishing sunset. “In Mexico with @melrivers, Cooper and some dear friends. We are having the best time. How about this view!”, Rivers posted with the pic.
From then until this Friday December 30th she has been posting pictures of her with friends, her daughter Melissa Rivers (also a TV Host and producer) and her grandson Cooper, enjoying in Riviedra Nayarit. Those pics have already been visited by 14,575 Internet users, representing an important exposure for the destination.
Since last December 21st until this Friday five celebrities have already been seen in public in Riviera Nayarit. Joan and Melissa Rivers, Charlie Sheen, Denise Richards and Sofia Vergara have spent the winter break in Riviera Nayarit.
“When celebrities come here and have a memorable experience, the whole world puts its eyes on Riviera Nayarit. This is the CVB’s purpose: to exploit our competitive advantages and to share them with the world – and this year we’ve done precisely that: we’ve promoted our destination among millions of people. These efforts are later transformed into more tourism and more jobs for everyone in the hospitality industry, but also for people that work in the service industry and for farmers. All the People in Nayarit can reap the benefits”, said González Ortega.
The Convention and Visitors Bureau (CVB) of Riviera Nayarit is a private non-profit association dedicated exclusively to promoting tourism through a brand that encompasses the entire coast of Nayarit, from its southern border with Jalisco in Nuevo Vallarta, to Novillero whish is next to the bordering Sinaloa on the north – and also including the promotion of historic and cultural sites.
https://www.rivieranayarit.com/wp-content/uploads/2019/07/logox300.jpg 0 0 1stonthelist https://www.rivieranayarit.com/wp-content/uploads/2019/07/logox300.jpg 1stonthelist2011-12-30 15:32:002011-12-30 15:32:00Fashion Police ‘boost’ Joan Rivers in Riviera Nayarit