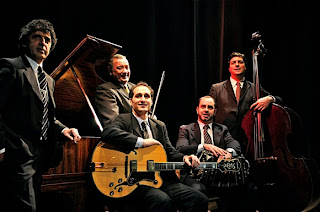 In Riviera Nayarit culture is our luxury. The State Council for the Culture and Arts of Nayarit (CECAN) will offer a concert by the Argentinean orchestra El Quinteto Real as part of an extension of the Cervantino Cultural Festival, which will feature Nayarit as its honorary guest.
The orchestra will play a selection of songs that have made them famous worldwide, and the concert will be open to the public at no cost at the main square of Bucerias at 20:00 hrs.
El Quinteto Real is the musical brainchild of Horacio Salgán, who dedicated his life to compose tango music for different musical ensembles, from duos to orchestras, including the one with his son César. The story began in 1960, when the Salgán-Lío duo joined the Francini-Ferro duo and the bandeonón player Pedro Laurenz in order to play the best Argentinean music.
The entire repertoire of this ensemble was created by Salgán, and includes tangos, milongas and waltzes. El Quinteto Real has been recognized as “The Best Quintet of the 20thcentury”, and has played in countries like Brazil, Colombia, and China, among many others.
History and culture are some of the main assets of Riviera Nayarit, which includes sites like the historic Port of San Blas or Mexcaltitán, where the Mexican culture originated, as well as the pre-Hispanic cultures like Huicholes, Coras, Tepehuanos and Mexicaneros, which make a trip to Riviera Nayarit something special.
Artists from all over the world have made destinations like Bucerías, Sayulita and San Francisco their home, as these towns cater to the arts and culture in a cosmopolitan way.
Cultural events like the one offered by CECAN promote our destination, complementing the marketing efforts made by the Convention and Visitors Bureau of Riviera Nayarit, and following the objectives to improve the life of all the people of Nayarit, as defined by the Government led by Roberto Sandoval.
https://www.rivieranayarit.com/wp-content/uploads/2019/07/logox300.jpg 0 0 1stonthelist https://www.rivieranayarit.com/wp-content/uploads/2019/07/logox300.jpg 1stonthelist2011-10-18 10:13:002011-10-18 10:13:00The Cervantino Festival is back in Riviera Nayarit