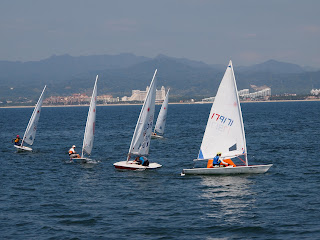 “I’m ready”, says confidently Tania Elias Calles, the most prominent Mexican competitor for the sport sailing competitions at the Pan-American Games Guadalajara 2011. She says it with the confidence of someone who has chosen Riviera Nayarit as her home because it’s the best place to practice this sport – and also because it’ll be the hosting venue for this event.
Riviera Nayarit will host the sail competitions that will take place on October 17 to 23, and touristic authorities are ready to welcome competitors and demonstrate why this destination, known as Mexico’s Pacific Treasure, has become one of the favorites for lovers of nautical sports.
Even Tania Elias Calles has said it many times, when she was asked why she moved to Riviera Nayarit in preparation for the most important sports events: the Pan American Games 2011 and the Olympic Games 2012.
“The conditions that we find in Riviera Nayarit are ideal for sailing. Not only because of the wind, but also because of the surf, which creates similar conditions to those found in international competitions – with the exception that the weather in Riviera Nayarit is good year-round, and this is why I decided to move here. There’s also the infrastructure, including modern marinas like the one at Paradise Village, which will be the hosting venue for the Pan-American Games, and Marina Riviera Nayarit at La Cruz de Huanacaxtle, where I’ve been training. There’s a good gym nearby, and there are certified specialists to fix any sailboat; it’s the ideal sailing combo”, said the competitor.
The Mexican Sail Federation chose the Vallarta Yacht Club at Marina Paradise Village as the official supporting venue for the Pan-American Games 2011. Competitors will depart from the piers to the waters of Bahia de Banderas.
Spectators will be able to enjoy the departure of competitors around noon from the public entrance to Nuevo Vallarta south beach, whish is known as Villa 5, and the sailboats will be visible upon entering the channels, and when they return ashore, which will be between 15:00 and 17:00, depending on the wind currents.
The navigation circuits will be defined daily according to the wind conditions, so it’s hard to pinpoint in advance which points at the coast will offer a better view of the competitors. Usually, the beaches in Bucerias have the best view, and competitors may be visible in the distance from there.
We have an historic opportunity to begin building a New Destination for the people of Nayarit, and the promotional efforts being made by the Convention and Visitors Bureau of Riviera Nayarit follow the objectives defined by the State Governor Roberto Sandoval, which aim to work for the people, attracting new markets that will benefit the economy of all the people in this state.
WHAT INTERNATIONAL COMPETITORS ARE SAYING
This is what the international sailors have said about their preparation and training trips to Riviera Nayarit.
“We were staying right next to the boats, and we had wind to navigate every single day, as well as warm weather year-round, which we simply don’t have in Spain. The facilities are at hand and have a really high quality.”
Fatima Reyes
Spain
“Two hours after my plane landed, I was already on the water working because I didn’t have to worry about looking for all the services required for my sailboat or about my lodging.”
Rob Crane
United States
“First we found Mexico as a place with great conditions for sailing. Afterwards, it was easy to find Riviera Nayarit; we only had to pay attention to where the big sail events were taking place in this country.”
Vaughn Harrison
Canada
“Here we can train with a variety of wind and surf conditions, which are good for sailing year-round. Besides, this area offers all the supporting infrastructure”
Chris Dold
Canada
https://www.rivieranayarit.com/wp-content/uploads/2019/07/logox300.jpg 0 0 1stonthelist https://www.rivieranayarit.com/wp-content/uploads/2019/07/logox300.jpg 1stonthelist2011-10-12 10:38:002011-10-12 10:38:00Pan-American sailing in Riviera Nayarit