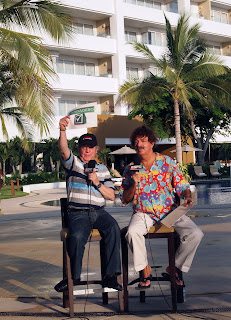 When José Ramón Fernández participated in a live broadcast from Riviera Nayarit for ESPN’s Nación show, the show achieved one the results that this destination, along with Puerto Vallarta, exptected to obtain when they decided to support the International Journalists Encounter, organized by Radio Universidad de Guadalajara and the Centro Universitario de la Costa.
However, an additional result was the fact that six million people in the United States and Mexico watched the show, a fact as unexpected as the appearance of ‘Ponchito’, interpreted by Andrés Bustamante, in the show.
This was the first time in almost six years that ‘Joserra’ and ‘Ponchito’ appeared together on TV, after the sports journalist withdrew from Mexican television, in which he made history. This time, they fulfilled everybody’s dream of watching Fernández and Bustamante together again, also ESPN’s dream, who had wanted to have this duo appear together for a long time, and also the viewers’ dream, who missed watching them together, and of Riviera Nayarit, who attained an important brand awareness in the United States, Mexico, and in eleven countries in Latin America.
According to data from the station, the program registered 0.22 rating points in the West Coast of the United States, where it was broadcast at 10:00 PDT, while in the East Coast it reached 0.73 rating points, as it was broadcast at 01:00 EDT. Mexico uses a different measurement system monitored by AdvantEdge, and registered 0.36 rating points.
“This represents about 2.5 million viewers in the U.S. alone, and we had about 3.5 million mexican viewers according to our data, adding to a total of 6 million viewers. Out of all the shows broadcasted by ESPN that Friday, this one had the highest ratings – and we still need to add the statistics from the rest of the countries”, commented producer Edgardo Mattei via email.
One of the objectives seeked by Riviera Nayarit by supporting the event was to draw the attention of some of the most important journalists in Latin America towards Puerto Vallarta and Riviera Nayarit during the International Journalists Convention. The rating data offered by ESPN indicates that the objectives were met.
“We believe that this event is really important. It’s not the same thing to talk about an unknown and distant place, than to talk about a place that you’ve experienced personally and later communicate one’s experience through the different media – it’s an incredibly important marketing asset”, said Fernando González Ortega, President of the Hotel and Motel Association of Bahía de Banderas.
https://www.rivieranayarit.com/wp-content/uploads/2019/07/logox300.jpg 0 0 1stonthelist https://www.rivieranayarit.com/wp-content/uploads/2019/07/logox300.jpg 1stonthelist2011-09-19 10:00:002011-09-19 10:00:00The show where ‘Ponchito’ and ‘Joserra’ met in Riviera Nayarit reached 6 million TV viewers