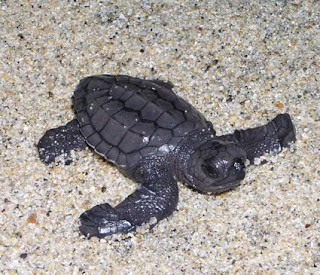 One of the most prestigious newspapers in Mexico, El Universal, has published this August 11th an article about the touching and exciting experience of turtle release at Riviera Nayarit. The publication highlights the impressive adaptation that turtles show to the growth of the tourism activity at Nuevo Vallarta, one of beaches on this destination registering more arrivals every year.

“According to the Sea Turtle Preservation Program ran by the Natural Area’s Protection National Council over 51 thousand sea turtles  nested at Riviera Nayarit during 2010, 6 thousand did it at Nuevo Vallarta”, said the publication.
Riviera Nayarit’s Conventions and Visitors Bureau (CVB) had already realessed a newsletter last year revealing a science study about this phenomena, that made even more attractive this activity for tourism on the destination.
The beaches at the hotel zones constitute excellent arrival areas for sea turtles, and the only thing you have to do is stay up the whole night a few feet away from your hotel room to see turtles laying their eggs.
Biologist Adrian Maldonado, who coordinates the Research Subcommittee of the Technological Institute of Banderas Bay (Instituto Tecnológico de Bahía de Banderas or ITBB), stated that the results of a study show that Nuevo Vallarta holds a higher number of arrivals than less developed areas like El Naranjo Beach, which is close to la Peñita de Jaltemba.

The historical data analysis for the past 10 years indicates that sea turtles set an average of 403 nests per mile in Nuevo Vallarta’s 8.7 miles of beaches. In 2007 only, about 6,000 Olive Ridely turtles arrived at this location.

The numbers presented by Maldonado are not exaggerated. In 2009, official evaluations at the turtle camp in Nuevo Vallarta estimated by October, close to 4,000 nests had been recovered and 200,000 turtle hatchlings released.
“At this camp, the numbers grow every year. What I can say for sure is that the number of recovered nests has grown 600% in the eight years that we’ve been working here”, said biologist Antonio Razo, who is in charge of safeguarding these beaches.
Once the incubation period is over and the eggs hatch, the Nuevo Vallarta camp offers the general public the opportunity to release a hatchling. The release program includes afternoon sessions that start around 6:00 PM with a cost of $20 pesos ($2 dollars), which are used to keep the camp running.
Nuevo Vallarta isn’t the only developed beach that offers the general public this privilege; other beaches include El Anclote, Punta Mita, Bucerias, La Cruz de Huanacaxtle and other developed areas. At Las Tortugas beach, where a nature-conscious development is taking place, 2,400 nests were saved in 2009.
Even though hotels located in Rincon de Guayabitos don’t have the largest arrival numbers, the experience is especially exciting at El Naranjo Beach, where one of the most committed protection and education programs has been established. Visiting El Naranjo is not only a delight for tourists, but it’s also a truly enlightening experience.
Nothing compares to witnessing the start of a new life and the struggle for survival, framed by a unique sunset. This is the beginning of the journey for these tiny creatures that will have to overcome all sorts of obstacles to reach adulthood. The tickling their flippers produce on the palm of our hands is transferred directly to our heart when experts explain that the one we’re holding in our hands will probably never make it back to this beach.
IN THE LIGHT OF SCIENCE

The studies made by the ITBB shed light on a fact that even scientists can’t fully comprehend yet: sea turtles don’t seem to be afraid of touristic developments. Amongst all the beaches in this region, the largest numbers are arriving at Nuevo Vallarta, where the beach has artificial lighting, a fact that was completely unexpected.

“An unfinished university thesis study focused on measuring the intensity of light on nest sites, and oddly enough it found that turtles prefer to lay their eggs in beaches that have artificial lighting. However, there is something we have to take in consideration: turtles have a natural aversion to light, so these results are even more surprising”, commented Adrian Maldonado.
https://www.rivieranayarit.com/wp-content/uploads/2019/07/logox300.jpg 0 0 1stonthelist https://www.rivieranayarit.com/wp-content/uploads/2019/07/logox300.jpg 1stonthelist2011-08-11 10:22:002011-08-11 10:22:00Newspaper highlights Turtle release at Riviera Nayarit