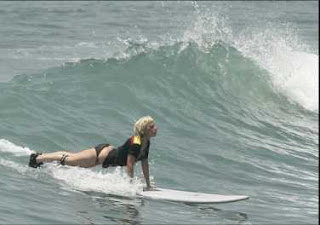 Pop SuperStar Lady Gaga visited Riviera Nayarit just before launchin her new single during the MTV Video Music Awards last August 18th.
Gaga stayed three nights, august 14th to 17th, at Los Ranchos, the same property where Kim and Kourtney Kardashian recently vacationed and, according to the British publication The Sun, she would have spent 14 thousand dollars a night. The Sun also said Gaga was seen topless at Punta Mita Beaches at least two times.
Witnesses report that the Pop Star took two days of  surfing lessons at La Lancha beach, right besides Los Ranchos and a fab break often visited by local surfers at Riviera Nayarit. Lady Gaga only could stand up over the board by the second day.
Surfers in the community could identify Josue Villegas (aka El Bota) and Isaac as the surfing teachers for Lady Gaga after TMZ.com releassed the pics. El Bota and Isaac are well known instructors from the Tranquilo Surf School at Punta Mita. Despite this, they preferred to keep the identity and experience of ther costumers in private.
The news of Lady Gaga strolling on the beaches of Punta Mita also spread quickly on the social networks.
In the last few months, Riviera Nayarit has become one of the favorite destinations for celebrities, with important personalities visiting, like the soccer player Thierry Henry, as well as Kate Hudson, Felicity Huffman, Gerry Lopez, Soleil Moon Frye, Courteney Cox and Kim and Kourtney Kardashian, among many others. Our destination has also become one of the most romantic destinations in the world according to publications like Reuters Life!, Travesías and Bodaclick.
Riviera Nayarit has also been catalogued as one of the 10 best destinations in Mexico and the Caribbean to travel with family, according to users from TripAdvisor, which granted the distinction to our destination as part of their Traveler’s Choice Awards.

The work being made by the Convention and Visitors Bureau (CVB) of Riviera Nayarit is visible through Mario Lopez’ posts on the social networks, which will help to position our destination as one of the best worldwide, and to highlight how important it is for hotels, restaurants, authorities, tourist service providers and for the society in general to offer the best possible experience for those who visit our destination.