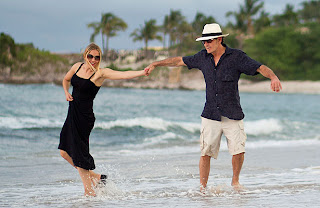 Actor Charlie Sheen just celebrated his ex wife Brooke Mueller birthday with a romantic getaway at most amazing paradise, the Four Season Punta Mita at Riviera Nayarit, as published by himself on his twitter acount.
“Romantic weekend in Mexico celebrating Brooke’s birthday..! Can you guess where we are?”, Sheen first tweeted on Saturday August 20th afternoon. The actor was later on the day seen having fun by the pool of Four Seasons Punta Mita.
“Epic weekend! Amazing time with Brooke in Mexico! Ocean is warm… pool is insane… like a moat around our villa! Love it here!”, he said by Sunday noon and added later: “Forgot how much I love this place. Mexico is paradise… Brooke and I are thinking about staying for the rest of the month”.
Two and a Half Men ex star was captioned by TMZ.com gossip news site that quoted Sheen saying he was trying to recapture his relationship. “We are two good friends trying to be great parents”.
In the last few months, Riviera Nayarit has become one of the favorite destinations for celebrities, with important personalities visiting, like Lady Gaga, the soccer player Thierry Henry, as well as Kate Hudson, Felicity Huffman, Gerry Lopez, Soleil Moon Frye, Courteney Cox and Kim and Kourtney Kardashian, among many others. Our destination has also become one of the most romantic destinations in the world according to publications like Reuters Life!, Travesías and Bodaclick.
Riviera Nayarit has also been catalogued as one of the 10 best destinations in Mexico and the Caribbean to travel with family, according to users from TripAdvisor, which granted the distinction to our destination as part of their Traveler’s Choice Awards.
The work being made by the Convention and Visitors Bureau (CVB) of Riviera Nayarit is visible through Mario Lopez’ posts on the social networks, which will help to position our destination as one of the best worldwide, and to highlight how important it is for hotels, restaurants, authorities, tourist service providers and for the society in general to offer the best possible experience for those who visit our destination.
https://www.rivieranayarit.com/wp-content/uploads/2019/07/logox300.jpg 0 0 1stonthelist https://www.rivieranayarit.com/wp-content/uploads/2019/07/logox300.jpg 1stonthelist2011-08-22 15:18:002011-08-22 15:18:00Charlie Sheen gets romantic in Riviera Nayarit

Nuevo Vallarta Is The First Clean Tourism Destination In Mexico “Reconnect Mexico” displays the wonders of the Riviera Nayarit
0 replies