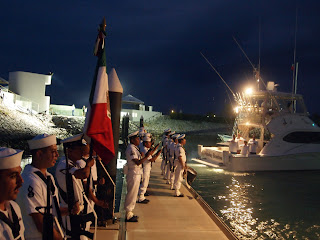 ·   33 boats were registered for the 5th Riviera Nayarit International Tuna and Marlyn Fishing Tournament. Over 40% of them are US competitors
Lots of Tuna seen by Los Bancos area and reports of Blue, Black and Striped Marlyn around Banderas Bay rised great expectations for the 5th Riviera Nayarit International Tuna and Marlyn Tournament that registered 132 participants and started last 14th of July with a cocktail party and continues with the fishing days on the 15th and 16th of July, departing from Marina Riviera Nayarit at La Cruz de Huanacaxtle.
Great ambience and the reports on tuna made a great pre-fishing for both the organizing committee and the captains of the 33 ships on the competition. A great number of yellow fined tunas catchs are on the bet the present edition of the tourney.
“We are coming to win again”, said the crew on ‘Ana Maria’, champions last month for a 235,800 marlyn catch at San Blas. They arrived late night for a registration but with an enormous optimism.
This optimism also reached Andres Famania, president of the Banderas Bay Fishing Club and head of the committee, who said participation is the clue to consolidate this tournament and that this time they have a considerable increase on international crews on the competition. “We have over 40 per cent of the 132 coming all the way from the US and Canada just to attend the Tourney and fish with us”.
This high international participation is reflected on the arrival of 48 footers and even larger boats, requiring the high level services available on destination, and is a response to the great fish registered over the past editions.
“We have the 322 kilograms marlyn record from the first tournament,  but the second year there was a 318 kilograms catch and after that another 280 kilograms marlyn. That’s the best promotion, not only for this tournament but also to attract fishing tourism trough the year long”, Famania said.
https://www.rivieranayarit.com/wp-content/uploads/2019/07/logox300.jpg 0 0 1stonthelist https://www.rivieranayarit.com/wp-content/uploads/2019/07/logox300.jpg 1stonthelist2011-07-15 09:26:002011-07-15 09:26:00132 fishermen compite to catch the big fish at Riviera Nayarit

Travel Agents In Ecuador And Peru Get Their Turn