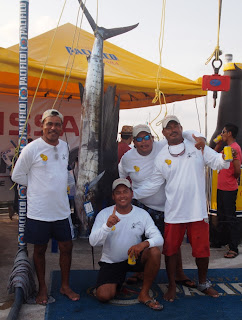 If you are to believe lucky numbers, then this 2011 is to be one of the best for the San Blas International Fisihing Tournament because 51 ships registered to celebrate its 51st aniversary, to be held June 1st to 5th, and went over seas in the search for the big fish.
Great ambience and joy was felt this Thursday before the start shot, given at 7:21 in the morning, while the crews got ready for the first day of competition. A touching but simple inaugural ceremony took place  just before the ships departure with the Mexican Navy honoring the flag and wishing “good sea and better fishing” for the competitors.
Riviera Nayarit is one of the most enticing settings for sport fishing lovers. Wahoo, sailfish, dolphin-fish, tuna, three different species of marlin, sawfish and snapper guarantee a great fishing experience year-round.
Last year, Tepic’s Sport Fishing Club made history during the celebration of the 50th International Fishing Tournament in San Blas, by offering millions of pesos in prizes, and this year they will raise the bar once again.
Fonatur’s Touristic Marina at the historic Port of San Blas will host this traditional and renowned sport fishing event. This is a privileged destination because of the diversity of its natural environment that not only makes it one of the favorite destinations to fish, but has also earned recognition as the best place in Latin America to do bird watching.
The first place winner of the sailfish category will win a Sentra Custom 2011 car, while the second and third places will also win cars, and the fourth place will win an off-board motor. There will be a Tiida car for the Marlin category and off-board motors for the second and third place. The dorado category offers a March Sense car for the first place, and fishing gear for the second and third place.
FIRST RESULTS
Oscar Arturo Lopez, who won  Marlyn trophy last year, made the big catch again on the first day of competition. On board of his own boat “Oscar’s” he saw a sailfish couple feeding near 14:00 hours. He first hooked the female and after a while fighting made also the catch for the male. The male weighting 31.200 kilograms was enough for the win of the day, second place was for Nubia Alicia Ship also catching  a 30.100 kilograms sailfish. This Friday competitors rest and activities restart on Saturday and Sunday.
https://www.rivieranayarit.com/wp-content/uploads/2019/07/logox300.jpg 0 0 1stonthelist https://www.rivieranayarit.com/wp-content/uploads/2019/07/logox300.jpg 1stonthelist2011-06-03 07:39:002011-06-03 07:39:00San Blas International Fishing Tournament started with lucky numbers

The Riviera Nayarit Expands Its Reach In The United States
Las Islas Marietas’ Seabed Gets Cleaned Up For World Oceans Day
Guess who is coming back to Riviera Nayarit!
Joint Promotion Tours The Southwest US
Dallas Cowboy's Cheerleaders will get in swimmingsuits at Riviera Nayarit
Vallarta-Nayarit Gastronómica… Some Kind Of Love
500 doctors will visit Riviera Nayarit
Travel Agents In Ecuador And Peru Get Their Turn
0 replies