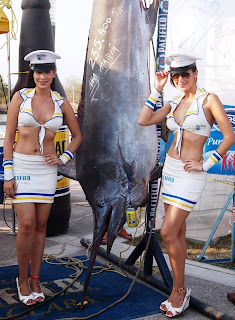 Lucky, lucky numbers. A new Marlyn record for the 51st San Blas International Fishing Tournament was the result after having exactly 51 boats registered for the competition at Riviera Nayarit, that ended this Sunday June 5th with a party full of joy.

It was the crew on Ana Maria that make lucky numbers to come true since they registered on Saturday the catch of a 235,800 kilograms Marlyn, the biggest ever caught in the history of this tournament and the only one for this year´s edition.

But these guys didn’t stop the fight. On Sunday they standed for another big catch and got a 15,100 kilogram Mahi Mahi (just in the weight limit), good enough for the second place in this category, that was won by the crew of Godzilla with a 15,900 kilogram Mahi Mahiu also caught on Sunday.

Radio Mil, Record Occidente, Caras Sports and touristic magazine Ruta Sin Límite are some of the media that had a coverage for San Blas Tournament and, apart reporting about the sport, highlighted infrastructure and touristic services provided at Riviera Nayarit, which achieved great promotion for the destination just before the start of Summer Vacation season.

The Riviera Nayarit’s Conventions and Visitors Bureau (CVB) has supported high level sports competitions in the destination not only for them to attract visitors during the event but also because specialized media coverage become a very important promotional value.

Experience The Adventure With #RivieraNayaritExtremo

Tech by the sea at the 2019 MITA TechTalks