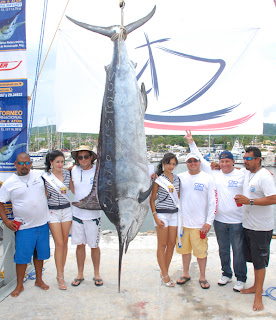 ·   Everything’s ready for the 5th International Tuna and Marlin Fishing Tournament of Bahia de Banderas Riviera Nayarit, which will take place next July 14-16 at La Cruz de Huanacaxtle
Five years ago, Andres Famania Ortega caught a 322-kilo specimen at the International Tuna and Marlin Fishing Tournament, setting the record for the largest marlin ever caught in a competition. This year, the president of the Bahia de Banderas Fishing Club is hoping that this record will be broken, as only a few days ago there were some records broken at the International Fishing Tournament of San Blas.
“During the last two years we were forced to change the tournament dates to August, and the fishing wasn’t spectacular, but this year we’re moving it back to July and I think that it’ll help tremendously to improve the results, resulting in more catches and larger fish – we’ll see if we can break the record again”, commented Famania Ortega on the new edition of this tournament.
This year, the International Tuna and Marlin Fishing Tournament of Bahia de Banderas Riviera Nayarit will take place on June 14 to 16 at Marina Riviera Nayarit, and will offer millions of pesos in prizes, including four new cars, a 4-stroke 60 HP off board motor, professional fishing gear, free hotel stays, cash, and much more. Furthermore, the registration cost for teams of up to four competitors has been reduced.
In addition to the prizes for the four different categories, which add up to approximately $1.5 million pesos, competitors will be able to participate in the daily stakes of the largest catch of the day, and earn cash prizes of $1000 USD per day and per team in the marlin category, $500 in the tuna category and $500 in the dorado category.
Riviera Nayarit is one of the most important fishing destinations around the world, as it offers great fishing year-round, and several kinds of fish like wahoo, sailfish, dolphin-fish, tuna, three different species of marlin, sawfish, and snapper among many others.
Additionally, our destination offers world-class marinas, fiberglass specialists, and technicians that can fix all the gadgets found on a ship, as well as incredible restaurants, luxurious hotels and the complete infrastructure that this sport demands.
ANGLERS, GET READY
5th International Tuna and Marlin Fishing Tournament of Bahia de Banderas Riviera Nayarit
July 14 – 16
Registration fee: $20,000 pesos (until June 30), and $22,000 pesos (July 1 – 14).
Four members per team.
For further information, contact: info@fishingnayarit.com
https://www.rivieranayarit.com/wp-content/uploads/2019/07/logox300.jpg 0 0 1stonthelist https://www.rivieranayarit.com/wp-content/uploads/2019/07/logox300.jpg 1stonthelist2011-06-16 09:45:002011-06-16 09:45:00Competitors will try to break fishing records in Riviera Nayarit