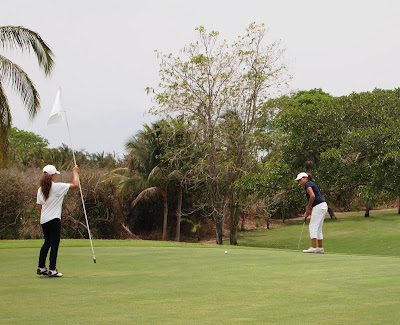 190 competitors attended the LXI Youth Golf National Championship that was played simultaneously at El Tigre and the Flamingos courses in Riviera Nayarit from May the 6th to the 8th, attracting over 100 families resulting an important income to the destination.

This tournament was the key to almost 200 kids hoping to improve their golfing careers. Over 64 mexican golf clubs brought representations as well as competitors from Ecuador and Guatemala willing to rise not only a trophy but the possibility to earn tickets at the most important international summer tournaments such as the American Junior Golf Association (AJGA) and the Callaway Junior World Golf Championship.

The Championship in addition served as a frame for the changes in the board of the Mexican Federation of Golf (FMG) for the period from 2011 to 2014, when in an emotive ceremony Jorge Kahwagi Gastine took the oath as new President.

The efforts by Paradise Village’s, trough The Tiger Golf and Country Club, and Flamingos Golf Club, to obtain this important tilt resulted in great benefits for Riviera Nayarit, since approximately 100 complete families came to the destination to support the competitors, each of them generating an average assessment of 2,400 dollars in the total of four days in which they were, for an approximate total of 240 thousand dollars.

Gabriela Lopez and David Faraudo outstanded by their performances, both in the category from 14 to 18 years, keeping the leadership through the whole tilt in one of the most challenging courses of the country, El Tigre.

“We are extremely satisfied by their scores”, said Jorge Coghlan, President of the National Infantile and Juvenile Committee, entity that sanctions the tournament. “We had a thrilling tournament and the performance of the national team members was very meritorious.” 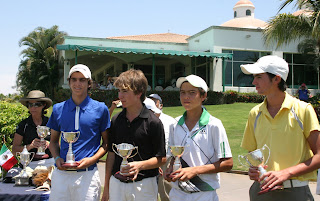 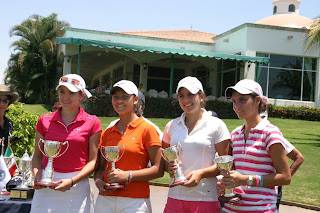 Men’s. Mauricio Miranda, from Campestre de Chihuahua, undid the tie of the first two rounds and made victory with only one stroke difference, 118 against 119, of Santiago Bonequi, from Vallescondido. T Félix Feres, from La Loma at San Luis Potosí, made it for the third place.

Women’s. Valentina Bosch, from Santa Anita, turned out to be the champion with 105 strokes, Romina Villlanueva, from Vallescondido and Valentina Origel, from Santa Margarita, scored 111 for a tie in the second place.

Men’s. Though being lately under big pressure, Fernando Castillo, from La Herradura in Monterrey, won the category only one stroke apart from Christopher Islas, from Pachuca, and Leonardo Meníndez, of La Hacienda.

Women’s. Isabella Fierro, from Playa Palmas, won with ten strokes of difference apart from Ana Carola Ramirez, from Pachuca, and 26 strokes away from Alison Luann Gastelum, from Campestre de Chihuahua.

Men’s. In spite ofloosing advantage at the final holes, Héctor Javier Barnetche, from Real 14 at Sonora, had his first victory in a National Tournament scoring 223 strokes; Luis Carrera, of La Hacienda, hit 225 for the second place and Alejandro Madariaga, from La Vista on Puebla, scored 230 for the third place.

Women´s. Maria Balcázar, from Tuxtla Gutiérrez, made good the bets marking her as favorite and took the champion’s trophy. She scored 226 strokes, Mónica Dibildox from Campestre de Saltillo scored 228 for the second place, and Ana Paula Ramirez, from Pachuca, ended third with a 234 strokes card.

Men´s. Roberto Lebrija, from Campestre at Mexico City, finished first with an on regulation 216 strokes card. Víctor Daniel Sanchez, from Vallescondido, signed 222 strokes for the second place and Jorge Villar, of La Vista, scored 223 strokes for the third place.

Men´s. David Faraudo, from Guadalajara Country Club, closed with a 74 round and despite of it won the category three strokes under par, for a total of 213. Juan Carlos Benítez, from La Vista, had the best round last Sunday (71) and ended second. Gonzalo Rubio, from Las Misiones on Monterrey, made it for the third.