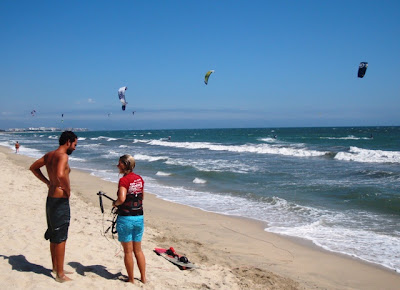 HBO’s cameras will focus on the 150 kites that will take off from La Cruz de Huanacaxtle to participate in the speed regatta that will assemble the best kitesurfers in the world during the Wind Festival 2011 next May 20 to 22 in Riviera Nayarit.
The most influential network in terms of purchase decisions worldwide approached the event organizers with the idea of creating a 30-minute episode for the Destino Deporte program, which will focus on the competition and on this sport, which has increasing numbers of followers and popularity.

The Wind Festival 2011 will assemble around 150 kitesurfers from Mexico, the United States and Canada, including the world champion Sean Farley from Colima, and Diego Tron, who won this competition last year.

The main event will take place on Saturday 21 at noon, when competitors will meet on the start line at noon at Marina Riviera Nayarit in La Cruz de Huanacaxtle for the speed competition of both the kitesurf and windsurf categories. The finish line will be close to the beaches in Bucerias, and the freestyle qualifiers will follow this event.

On Sunday 22, there’ll be a distance race between Bucerias-La Cruz-Bucerias, and the freestyle finals and awards ceremony will take place at around 18:00 hrs.
“Watching all the kites go out at the same time offers a very bright and colorful show during the race, and watching the stunts made by the freestyle competitors is simply amazing – an experience not to be missed”, said the organizers.

The Convention and Visitors Bureau (CVB) of Riviera Nayarit celebrates the organization of these competitions in our destination, as they contribute to attract high-quality tourism that has a low environmental impact to our destination. High endurance sports are a key niche to achieve this goal, as they deal with people who are strongly focused on achieving goals, and who also have purchasing power and a well developed environmental culture.

Proof of this is the coverage made by HBO through Destino Deporte, a sports news show that covers the less explored territories of sports. The program produces one monthly show that is broadcasted on Sundays at 20:00 hrs, and then through reruns during the next 30 days. Destino Deporte is broadcasted through HBO to 31 countries in Latin America and also in the United States.

Riviera Nayarit CVB The AHMBB Will Have Local Certified Instructors