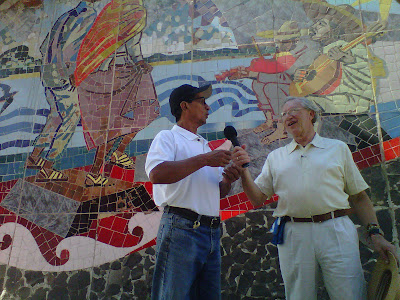 Robert Alexander is a “Gringo in Mexico”, and now he’s specifically a “Gringo in Riviera Nayarit”. The host of the Unicable show, together with this production crew visited the destination known as Mexico’s Pacific Treasure to make a program on the touristic features it offers to its visitors.

GEM (due to its initials in Spanish) has been on the air since 2006, and in these last five years it has been focusing on presenting travel opportunities in Mexico from the perspective of “a gringo that speaks Spanish with an accent and that actually knows about the land” to give a new twist on the traditional foreign productions that create these type of shows, but with a cultural distance that is apparent on screen.

Robert and his team visited chef Eugenio Villafaña at Villa La Estancia, and enjoyed shrimp and ray machaca at La Jarretadera. In Rincon de Guayabitos, he also met with the Guinness record holder for creating the largest beaded wall, tried yaka at Aticama, learned the history of the Port of San Blas, had a spiritual cleansing session with a Huichol marakame at Santiago Ixcuintla, and also visited Mexcaltitlan and drank tejunio in Tepic.

GEM is an original production from Unicable, which is part of Televisa Networks, and has national coverage in Mexico, but is also broadcasted through Univision, one of the five main TV networks in the United States independently of the language, as this Spanish-speaking network has the highest ratings in the country, reaching 95% of all Hispanic homes.

The show on Riviera Nayarit is scheduled to air on Unicable in June, and later this year through Univision, and is one of the public relations efforts being made by the Convention and Visitors Bureau of Riviera Nayarit to attract more visitors to the region.