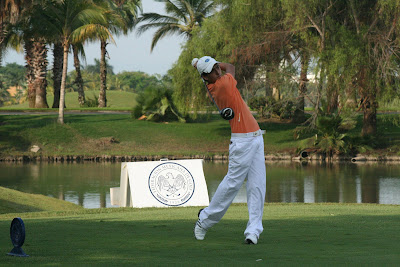 David Faraudo, from Guadalajara Country Club team, made the best out of his favorite position and climbed into leadership at the LXI edition of the Youth National Golf Championship, which is held at El Tigre and Flamingos golf courses at Riviera Nayarit. Fauraudo is tied on the first place to Luis Rogelio Medina, from Santa Anita. They both signed cards for 70 strokes, two under par.

“I had a great round, had a solid game and hope to improve tomorrow some details I didn´t liked to keep up on the leadership”, said Faraudo.

David hit four birdies and two bogeys. On the first half he took a bogey on hole number 3, but stand up with birdies at seventh and eighth in a row for a first partial of 35. On the second half, birdied on the tenth, got a bogey on the eleventh and scored another birdie at hole 14th.

Luis Rogelio played the best out of him to tie 70 strokes, with three birdies and only one bogey. On the first half he scored birdie on the second hole and bogey on the third, for a 36 stroke partial. For the last nine holes at El Tigre he scored birdies on the tenth and sixteenth to match 70 strokes and tie on the first place with Faraudo. 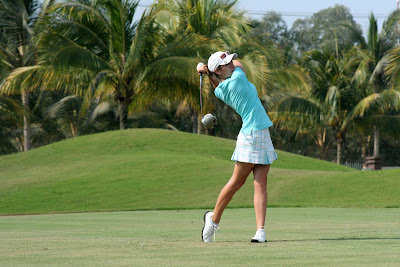 On the same age division, but ladies category, Gabriela López from Club de Golf México ended first round on the top of the chart, also with a 70 stroke round and comfortable four stroke advantage over Ana Paula Valdés, from Tres Marías, who is second and scored 74.

“I had a very solid round. Had some trouble at the beginning but as the game went on I felt better and fortunatelly socred under par”, said López. Five bogeys, four birdies and an eagle where signed at her card.

First half of her round started with bogey at first hole, birdied on the third and then three bogeys on the fourth, eighth and ninth to a 39 stroke partial. On the second half Lopez performance was like a roller coaster; birdied at 12th, got an eagle at 14th, birdied on 15th, scored bogey at 16th, then two birdies on a row at 17th and 18th to end the round with 31 strokes, 70 total.

This tournament is the key to almost 200 kids hoping to improve at their golfing careers. Over 64 mexican golf clubs brought representation and there are also competitors from Ecuador and Guatemala willing to rise not only a trophy but the possibility to tickets at the most important international summer tournaments such as the American Junior Golf Association (AJGA) and the Callaway Junior World Golf Championship.

In San Blas, the blessing of the water is a colorful and cheerful celebration
Wholesalers Appreciate Joint Campaign
Sayulita Named Pueblo Mágico; Tourism Potential Increases
SMBs Formalize In The Riviera Nayarit
The Riviera Nayarit And Vallarta Brought It Home In Montreal
Jalisco, British Columbia and California Top Destinations Of Origin For Visitors To Riviera Nayarit
Riviera Nayarit will be featured in The Dallas Morning News
Cross Marketing Campaign Generates Millions of Impressions
0 replies

Do you want to get a closer look to America’s Sweetheart at Riviera N... TV show “GEM: Gringo en Mexico” in Riviera Nayarit
Scroll to top