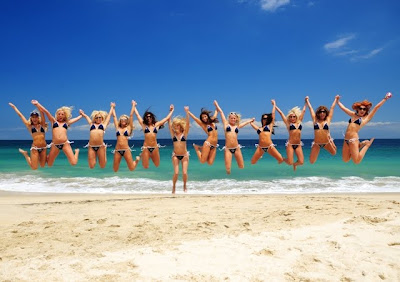 The Dallas Cowboys Cheerleaders are back in Mexico for the photo shoot of the 2012 calendar, which will feature Riviera Nayarit and Puerto Vallarta as a backdrop. Both destinations are combining promotional efforts under the slogan “Two paradises, one destination”, which is being promoted by Grupo Marival’s General Manager Alfonso Rizzuto.

The popular Dallas Cowboys Cheerleaders will participate in the photo shoot of the 2012 calendar in Riviera Nayarit and Puerto Vallarta on April 28 to May 5, which will be graced with the landscapes of both destinations as a backdrop. This calendar will generate an important touristic promotion for both destinations and for Grupo Marival, which will be featured not only in the calendar, but also in local television and in the Dallas Cowboys stadium during their games as locals.

The Dallas Cowboys is the most renowned football team. With followers from all over the globe, their games have some of the highest audience ratings for sport events, and their cheerleaders are known as “America’s Sweethearts” because they’ve become a true phenomenon that catches both the eye and the media’s attention.

Anywhere around the world where the Dallas Cowboys Cheerleaders make an appearance, there are hundreds of fans that follow them to get a photo or an autograph. Their fame has enticed the most important media networks to make special programs on them; they’re the favorites of the US Army, as they’re always cheering them in times of need, and they are also one of the favorite presenters of charities around the world.

This ability to attract attention, mainly in a market segment like Texas, which has historically been important both for Riviera Nayarit and Puerto Vallarta, is what makes this event important.

Last April 15, both destinations signed a joint collaborative agreement though the government of the states of Jalisco and Nayarit, and with Grupo Marival. During a press conference, participants highlighted the importance of having a joint strategy that allows promoting the concept of “Two paradises, one single destination: Mexico”.