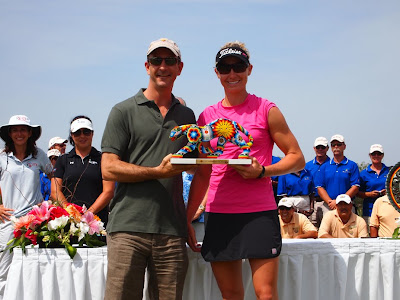 California’s Ryann O’Toole held off some stiff competition on the final holes today to win the $125,000 Santorini Riviera Nayarit Classic presented by Pepsi.
The third-year pro started today’s final round tied for tenth, four shots off the lead, but she carded a bogey-free finish with six birdies to post a winning score of 8-under 211 at El Tigre Golf & Country Club.
The former UCLA collegian held off Dawn Shockley (69) of Estes Park, Colorado and childhood friend Nicole Smith (69) of Riverside, California, who tied for second at 7-under 212. Shockley’s birdie attempt to force a tie lipped out on the 18th hole, while Smith took bogey on the final green.
“It’s just nice to get the season off to a great start,” said O’Toole, 24, of San Clemente, California, who earned her third career LPGA Futures Tour title with today’s win. “Dawn and I were going head-to-head in the same group all day and I knew I had to bring 100 percent of my game.”
Shockley, a second-year pro out of the University of Denver, also came to play and rattled off an eagle-3 on the fifth hole, followed by three consecutive birdies. But O’Toole answered with a birdie from 40 feet on No. 5, another birdie from 35 feet from off the green on No. 6, and a 20-foot birdie on the ninth hole.
“She putted awesome today,” said Shockley, of O’Toole’s performance. “I was playing well, but Ryann drained two long birdie putts on top of mine. What can you do about that?”
Like her old pal from Southern California junior golf, Smith brought her mighty tee shots to El Tigre today and charged up the leaderboard on the back nine with birdies on four of her last seven holes. Smith picked up momentum on the homestretch with a 15-foot birdie on the 16th, and added another birdie on 17 from 12 feet to tie O’Toole at eight under.
But an untimely pushed tee shot into the right rough on the final hole forced Smith to punch out and try to salvage her share of the lead. The former University of Tennessee player could not convert her tricky 40-foot par putt, dropping a stroke on the final green after a day in which she hit 17 greens in regulation and missed only two fairways.
“I knew Ryann was going to shoot something like five under today and I knew I had to do the same,” said Smith, who met O’Toole in a junior tournament when they were 12 years old. “This is bittersweet, especially to lose because of a poor drive, but if I can’t win, I’d rather have my best friend finish in front of me.”
O’Toole credited patience for today’s win, saying that after losing shots late on the previous two days, she came into the final round with a more conservative approach on the par-73 course.
“I’ve been silly going for pins that weren’t accessible, so today, I played it safe, didn’t press, and it paid off,” said O’Toole, who hit 15 greens and 12 fairways in regulation and needed only 28 putts. “Sometimes I just want to go for every flag, so I’ve had to learn that it’s not always smart.”
O’Toole’s prize check of $17,500 moved her from No. 21 to first on the LPGA Futures Tour’s 2011 money list after the tour’s third tournament.
For scores and more information, visit lpgafuturestour.com.
Tournament Trophy Is Creation Of Mexico’s Huichol Indians
The award for the winner of this week’s Santorini Riviera Nayarit Classic is not the usual crystal glass trophy that professional golfers typically receive. This week’s trophy has a special touch, thanks to the Huichol Indians who are the indigenous tribe in Nayarit and descendants of the ancient Uto-Aztec Indians of the Sierra Madre Mountains.
https://www.rivieranayarit.com/wp-content/uploads/2019/07/logox300.jpg 0 0 1stonthelist https://www.rivieranayarit.com/wp-content/uploads/2019/07/logox300.jpg 1stonthelist2011-04-11 09:17:002011-04-11 09:17:00O’Toole Hangs On To Win Santorini Riviera Nayarit Classic Price Travel: The Riviera Nayarit is among the most sought-after destinations Brazilian tourists are getting closer to the Riviera Nayarit