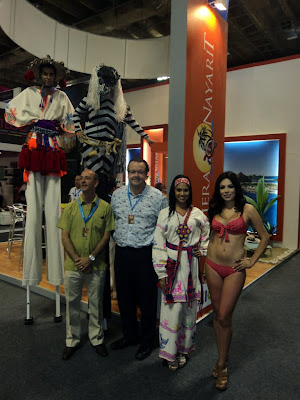 One of the key objectives of the Convention and Visitors Bureau (CVB) of Riviera Nayarit is to attract new markets in 2011, and the work done by our destination at the Tianguis Turistico de Acapulco, which ended last March 28, concentrated on this matter.
Wholesale travel retailers from Argentina, Brazil and Colombia, the most important emerging economies in South America, were interested in Mexico’s Pacific Treasure, since tourists in these regions are looking for new options to vacation in Mexico, and to get in contact with the local culture, biodiversity, history and gastronomy.
Tour operators from these countries, including Aero La Plata, TTS Viajes, MuchosViajes.com, Freeway, ADV and Orizonia, among others, consider that Riviera Nayarit is the ideal destination for tourists who seek to explore new regions in Mexico. Our destination offers high-end infrastructure framed by beautiful natural settings, and the challenge, however, will be to work hand in hand with the CVB to create the connectivity settings that will allow them to reach our destination easily and affordably.
One of the alternatives may be Copa Airlines’ proposition to establish a direct flight from Panama to our destination, which has been assessed as a great opportunity by wholesalers, but is still waiting for the approval from the Secretariat of Communications and Transportation. The CVB of Riviera Nayarit has backed this proposal since the beginning and has already been in talks with Federal authorities to support the project, even using the arguments provided by the National Tourism Agreement, signed by President Felipe Calderon Hinojosa last February 28.
According to this document, the strategic axis for the achievement of objectives literally reads: “To increase connectivity and to promote transit, in order to generate an increase in the number of travelers by air, sea and land from within the country and from abroad, as well as to facilitate the arrival, transit and departure of tourists”. Establishing the Panama-PVR route requested by Copa Airlines undoubtedly contributes to achieve this objective.
The CVB of Riviera Nayarit also held meetings with European airlines. There were positive negotiations with TUI Northern Europe; this wholesale airline has been in negotiations since 2010 and aims to start bringing tourism to Riviera Nayarit in 2012, once it receives the 13 Boeing Dreamliner aircraft it has purchased. During the negotiations, executives from this company said they had a serious interest in flying to our destination two times per week once they receive their new aircraft.
During the upcoming weeks, there will be additional meetings with TUI Northern Europe to establish a joint promotional strategy together with the Mexican Council for the Promotion of Tourism (CPTM), as this is one of the conditions that this airline requires to start operating the new route.
Air Europa said it’d be ready to promote new destinations in Mexico once it opens its new Madrid-Mexico City flight, which has already been approved and will commence next June. The airline would use its agreements with Aeromexico to market the shared code connections to Riviera Nayarit, thus allowing wholesalers to sell the complete route under the Air Europa label. Some Spanish travel agencies said they would try to position Riviera Nayarit in the Premium segment due to the high-end options it has to offer.
The work of Riviera Nayarit was under the spotlight during the most important touristic fair in Mexico, by presenting an attractive stand that had approximately 5,000 visiting tourism professionals.
Riviera Nayarit presented an interactive space, just like it did at the International Tourism Fair of Madrid (Fitur) last January. An artificial beach, the coffee of Riviera Nayarit, the attendance of artists of the Mexcaltitlan Ballet, of artists on stilts and a small taste of the experience of vacationing in our destination were some of the aspects that captured the attention of participants to the event.
https://www.rivieranayarit.com/wp-content/uploads/2019/07/logox300.jpg 0 0 1stonthelist https://www.rivieranayarit.com/wp-content/uploads/2019/07/logox300.jpg 1stonthelist2011-03-30 10:15:002011-03-30 10:15:00Riviera Nayarit is on route to achieving its objectives after the Tianguis Turistico