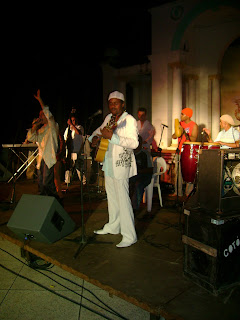 The Caribbean rhythms that since last Wednesday, October 20th are imbuing the air at the Cervantino International Festival will arrive at Riviera Nayarit with the traditional Cuban music of Coto y su Eco del Caribe, who will play on the esplanade of Marina Riviera Nayarit at La Cruz de Huanacaxtle next October 22 at 20:00. This presentation is a the result of the work being done by the Amado Nervo Cultural Festival, organized for 52 weeks by the Government of Nayarit, together with the largest cultural event in Guanajuato.
The cadences of Son, the unique Changui, the sensual Calipso, the joy of Reggae, and indispensable rhythms like Merengue, Salsa and Bolero will be played amidst a privileged scenario next to the ocean at one of the most beautiful and modern marinas in Latin America.
Talented Coto (named Juan de la Cruz Antomarchi) is an authentic guantanamero that holds an ample musical repertoire. His professional career began in 1982 as a tresero for Los Neiras band. A couple of years later at La Habana, he became part of one of the largest orchestras in Cuba: Capotin y sus Estrellas, making radio and television presentations, and completing several tours around the island.
The musician then became interested in his roots and gave “countryside” music a try by joining the Albita Rodriguez group, with whom he toured Colombia and Venezuela on five different occasions. Elio Reve, a guantanamero musician known as The father of salsa – because he’s as spirited as Cuban rum, as fragrant as coffee, and as Cuban as Son – devoted himself to watching over Coto’s steps after he found in him a worthy successor of the musical glory of his country: Papi Oviedo.
Coto’s father, known as the Diamante Negro del Son (Black Diamond of Son), was a musician who played three instruments. His mother was a singer and they both taught Coto and his brothers to play.
Although Coto never received formal musical instruction, he has played in the most famous scenarios and festivals around the world, sometimes as part of bands like Jovenes Clasicos del Son (of which he was a founder), Campo Alegre with Celina Gonzalez, and sometimes as a guest for Cubanismo, Rumberos de Cuba and of course, with Ecos del Caribe.
This artist has recorded albums with Moncho, Lucrecia, Elsa Baeza, Polo Montañez, Compay Segundo, Buena Vista Social Club and Cubanismo. In 1998, his song Donde esta Coto? (Where is Coto?) part of the Reencarnación y Malembe album with Cubanismo, reached the top five of the Latin Beat magazine in New York. The Niña Prodigiosa album is dedicated to his daughter, who also happens to sing some of the songs.
On October 22nd, Coto y su Eco del Caribe will delight the audience with their music at Marina Riviera Nayarit as part of the activities of the Amado Nervo Cultural Festival, just before their presentations in Guanajuato and Leon.
For 52 weeks, the Amado Nervo Cultural Festival, promoted by the State Center for the Culture and the Arts of Nayarit (CECAN by its initials in Spanish) has been celebrating the Bicentennial of Mexico’s Independence. This is why on October 17 to 27 Nayarit is hosting some activities that are part of the Cervantino International Festival.
https://www.rivieranayarit.com/wp-content/uploads/2019/07/logox300.jpg 0 0 Marc Murphy https://www.rivieranayarit.com/wp-content/uploads/2019/07/logox300.jpg Marc Murphy2010-12-22 11:15:002010-12-22 11:15:00The Cervantino International Festival reaches Riviera Nayarit

Riviera Nayarit, where whales leave a trail
Scroll to top